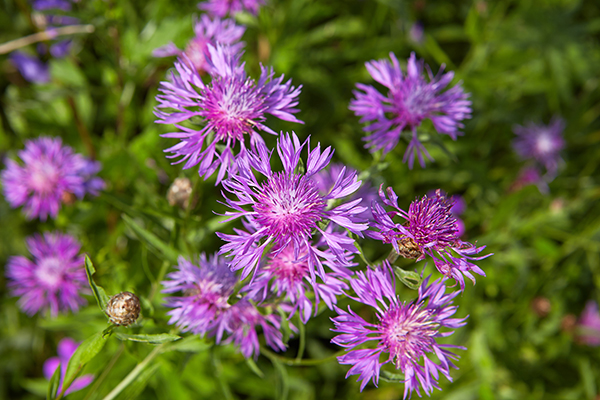 This plant probably arrived in the 1890's as a stow-away in alfalfa or hay seed brought over from Europe and Asia. Spotted knapweed is now a serious problem in the rangelands of the northwest Great Plains in the United States.

In Wisconsin, until the 1980s, spotted knapweed was common only to disturbed areas like road ditches and field edges. Since that time, it has rapidly invaded central Wisconsin’s prairies and barrens, as well as pastures, hayfields and other grassland areas.

Freaky Fact: Spotted knapweed makes and then secretes chemicals into the soil that kill surrounding plants. There a name for this. It's called allelopathy.

Spotted knapweed is a biennial (lives two years and flowers in the second year) or short-lived perennial (lives for three or more years) forb (an herb other than grass), and reproduces from seed. It typically grows to 3-4 feet in height and blooms from early July to early August. Look for its pinkish-purple flowers that look similar to Canada thistle flowers and measure up to 3/4 inch.

The pale, slender leaves grow from 1-3 inches in length and are alternate on the stem. The leaf surface is rough and the upper leaves are more linear in shape. Each flower head has stiff (bracts) leaves at the base of the flower that have fine vertical streaks tipped with dark, comb-like fringes that give the flower head a spotted appearance.

Each plant can produce an average of 1,000 seeds, allowing a population to spread rapidly. Seeds are brownish in color, smaller than 1/4 inch in length. Look for the notch on one side of the base and the short tuft of bristles at the tip. This helps the seeds disperse in the wind. Knapweed has a stout taproot.

When knapweed moves into an area, the native plants previously used as nesting cover for grassland birds and other wildlife largely disappears according to wildlife biologists from the Wisconsin Department of Natural Resources.

This invasive plant typically starts growing on roadsides, spreading quickly along the road corridors, agricultural field edges and railroad beds. This non-native plant can live in a wide range of habitats and can quickly take over native prairies, savannas, fields, and grasslands.

As this invader takes over more and more of Wisconsin's grasslands, biologists are afraid that it could take away habitat that rare birds depend upon. The prairie chicken, a bird found in the central part of the state, is one bird that needs grasslands.

Preventing spotted knapweed from spreading is extremely important. Mowing during or after flowering can cause the seeds to spread. The plant can also spread in hay and under vehicles. People need to be careful of using hay from road ditches of main roadways, or hay purchased from known infested areas.

If a small population of this plant is found, you can easily pull it by hand when the ground is damp. Be sure to pull the entire root. Flowering plants can be bagged and removed from the site. Individual plants or small populations of knapweed should be controlled before they become large populations.

Biologists have found that two root mining moths, a flower moth, and a root mining beetle can be used to control spotted knapweed, but they vary in how well they work. A few chemicals that slow or kill plant growth can work well, but they can also damage sensitive natural areas if they are not applied carefully. Large populations of knapweed can be reduced, but not eliminated, with regular hot prescribed burns, followed by reseeding with native plants.