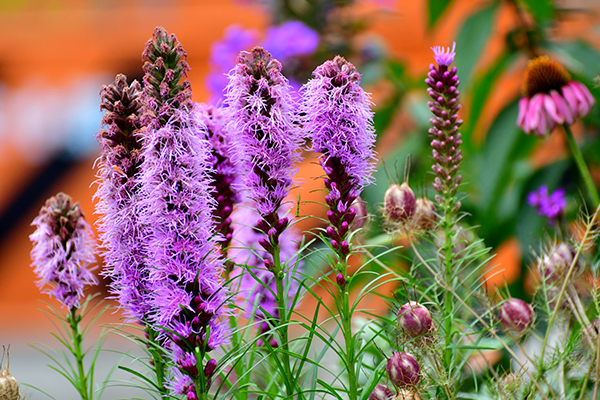 No, this is not something you'll find in the sky. It is a purple flower found in prairies of the great plains and throughout the Eastern United States. Imagine being a pioneer and walking through an unbroken prairie with miles of purple flowers out ahead of you. Sounds great, doesn't it?

The blazing star is a bit tricky to identify since many other purple wildflowers look similar. Look for a flowering stalk with purple-pink flower heads with a cup-like base and purple "pappus" made of feathery bristles exploding out the top. They look like tiny thistle heads. Each flower head grows opposite the next on the stalk, with the top ones blooming first, then on down the stalk. Rough to the touch, spiked leaves grow between each of the flowers and become larger towards the base of the plant. Blazing star is found in dry fields, prairies, and dry roadside ditches. It blooms from August through October and grows 1-4 feet tall.