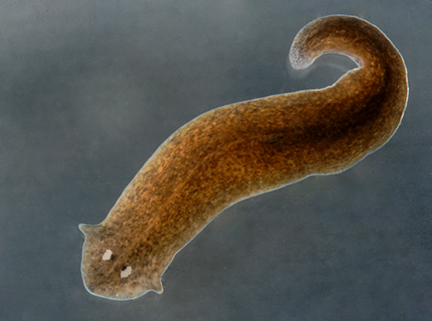 The planaria or flatworm looks a lot like a garden worm. You can tell the difference by its triangular head and two eyespots. It sucks up its favorite meal of seed or clam shrimp, water fleas and dead animals with a straw-like mouth. Don't look for the mouth on its head - the mouth comes right out of the planaria's belly. A planaria finds dead decaying animals not only a tasty meal but also a good place to crawl into and hide. It doesn't need gills or lungs. It gets oxygen right through its skin! It is interesting that if you cut a planaria in two from head to tail, both halves will live and grow new, complete bodies.