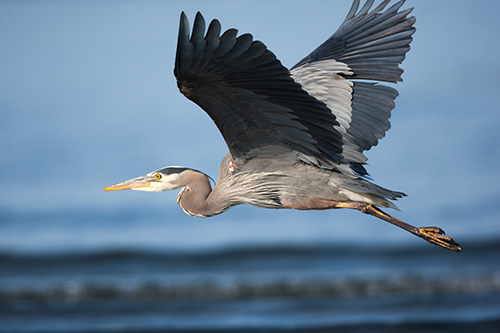 Have you ever seen groups of huge nests made of large sticks weighing down tall tree tops? These colonies of nests are called "rookeries" and they are the spring nesting place of the sleek and beautiful great blue heron. Rookeries can have as many as 135 nests in them. This is the heron's way of being sure there's always a bird keeping watch to protect the group against predators like raccoons.

Most of the time great blue herons can be seen wading in wetlands stalking fish with their scissors-like long beaks. They tower motionless over the water with their height of 4 feet, waiting to spear fish or catch frogs or snakes when they get close enough. They'll even eat mice and birds at times. Their blue-gray color seems to blend into the wetland scenery, however, you can't miss them when they take flight with their 6-foot wingspan and gangly legs trailing behind. They can cruise at a speed of 19 to 29 miles per hour. One bird was clocked at 23 miles per hour. You can always tell them apart in flight from Wisconsin's other "big bird," the sandhill crane, because the great blue heron flies with a crooked neck and the crane always keeps its neck out straight.

The coloration on the great blue heron is very distinctive. Look for their blue-gray color with a black stripe above their yellow eye which extends to the back of the neck in a plume of feathers like a ponytail. Their bill is very long and yellowish in color. In order to wade through wetlands, their legs are long, narrow, and grayish with red on the thigh area.

The great blue heron may be a beautiful bird, but don't think they are always dainty and polite! You can't miss them in the spring as they prepare to nest, just listen for the loud and obnoxious squabbling and squawking going on. These birds will build fresh nests or refurbish old ones in tall treetops near their feeding area, far from human disturbances. The males will sometimes bow their heads and then steal sticks from other bird's nests just to try and impress a female great blue. This is all a part of their mating rituals.

The males select a new mate each year and together they build the nest and incubate the 3-5 eggs that are laid. Sometimes the eggs fall prey to predators like ravens, crows, raccoons, and birds of prey. Adults feed the surviving young that hatch by regurgitating (vomiting) predigested food. The older, larger chick usually get most of the food. Soon, chicks slowly test out their legs by walking near the edge of the nest, stretching their wings and cleaning their plumage preparing for that first flight. Weaker chicks often get pushed aside from the activity and can fall from the nest and die from starvation. At 8 weeks, usually one to four chicks are left and they will clumsily take short flights between nearby trees to practice flight. Pretty soon they are fishing on their own. They may live to be 17 years old.

It's best never to go near a rookery. For one, it is against the law to disturb a rookery, but the herons will also do heir own punishing by throwing up on invaders or puncturing their skull with their powerful beaks! These are true stories. These birds also trash their own backyards. Since they catch fish pretty regularly, sometimes the fish don't always make it back to the nest and you'll see dead fish hanging in trees or on the ground nearby. The great blue's droppings are also very acidic from the fish and their droppings tend to kill the very trees they are nesting in. This "trashing" of their nesting area means they'll need to move and find a clean place to start over next year.

Wildlife viewing areas where you can see herons: