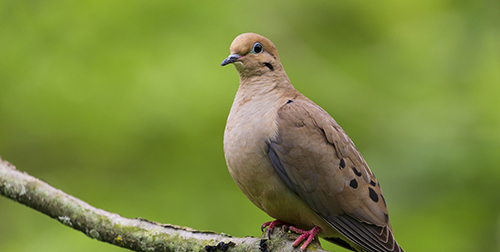 The mourning dove was named the state symbol of peace in 1971. Mourning Doves are named for their familiar song, a low moaning "cooah, coo, coo, coo." The males and females look very similar, but the males can be larger and more colorful with a bluish cap and a pink chest. Mourning Doves measure about 12 inches with a slim body, grayish-brown backs, buff-colored undersides, black spots on the wings and behind the eye, and white feathers in the tail which can be seen in flight. Look for their small head and a long, pointed tail. Listen for their wings to "whistle" as they fly.

These doves are one of the most abundant and widely distributed birds in North America, and Wisconsin. Listen for their cooing as the sun goes down and look for them on telephone wires, on at your bird feeder and in forested areas throughout the year. These doves are more abundant in the southern two-thirds of the state.

The mourning dove breeding season is long, from April to September, but most nesting happens from May until August. Doves build a platform of loose twigs and grass in trees or shrubs at about 10-30 feet above ground. In wooded areas, elms and maples are preferred and in open areas, they like lines of coniferous trees (spruce trees) and windbreaks for nesting. Mourning doves lay two white eggs per clutch (a nest of eggs) and raise between two and five clutches per year. Both parents take part in incubating the eggs and caring for the young. In the first weeks, mourning dove hatchlings are fed crop milk or "pigeon milk," which is secreted by the crop lining in both the male and female. It is extremely nutritious - more than cow's milk! Young doves, or "squabs," hatch without feathers and grow fast, increasing their weight by 14 times within 15 days of age. Young can survive on their own at five days after leaving the nest and most leave the nest area within two to three weeks of fledging. Mourning doves usually do not live long and may not survive for more than one year because of predators, disease, accidents, hunting and weather extremes.

Doves like weed seeds such as pigweed, foxtails, wild sunflower, and ragweed. They also like grains that include corn, sorghum and millet. Insects are also a side dish in the dove's diet. Doves will travel two to eight miles for food.

Wisconsin has two sub-species of Mourning dove that look almost alike. Some of them migrate to wintering grounds and others stay in Wisconsin all winter.

This bird species is currently hunted in Wisconsin, along with many states. They have been hunted for many years throughout the United States and continue to be one of the most abundant birds in North America.