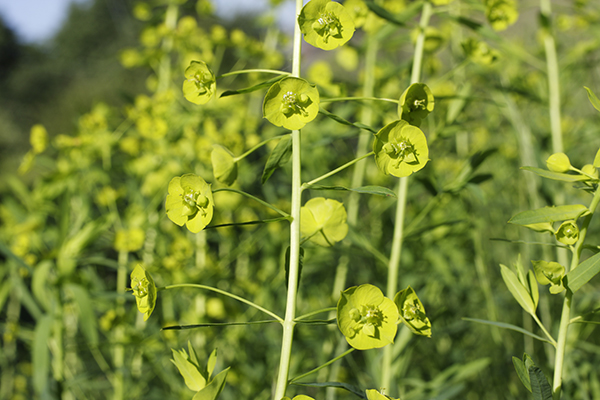 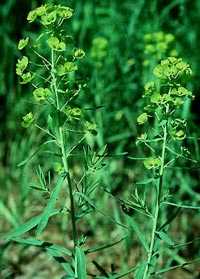 Leafy spurge is considered a noxious weed under Wisconsin law. People who have land where it is found must try to control the plant. If not taken care of, it can take over in just a few years! Leafy spurge can be devastating in grasslands for native plants, and it replaces natural food choices and habitat for grassland animals.

Leafy spurge is a weed that has deep roots and stands six to 36 inches tall. Shoots appear in late March. Look for straight bluish-green stems with alternate leaves. From May until the end of July, you'll see flower clusters at the top of the stem. Inside the plant is a milky white sap that causes a skin inflammation in some people. The plant stops growing during the hottest and driest weeks of July and August.

Leafy Spurge is from Europe and Asia and was first recorded in the United States in 1827. It was probably accidentally mixed in with agricultural seeds, or maybe intentionally introduced for its attractive blooms.

Similar to the spotted knapweed, leafy spurge is considered a serious pest in the grasslands of the Great Plains. You'll find this invader mostly on roadsides, prairies, savannas, pastures and fields. It can live in a wide range of habitats, from damp to very dry soils. In Wisconsin it is usually found in lighter, dry soils. Leafy spurge likes sunny areas, but can also grow in partial shade.

Leafy spurge prevents the growth of nearby plant species by releasing a toxic substance into the soil. It spreads quickly and crowds out native plants with up to 1,800 stems per square yard. Its tough and woody roots can go down as far as 15 feet, and spread up to 35 feet sideways, making it hard to get rid of the plants. Even if the plant is destroyed above ground, the roots will send up new shoots. Leafy spurge also sends seed capsules flying like an explosion, up to 15 feet away. Wow!

Take control of this alien

Unfortunately, cattle do not like this weed, but luckily goats can stomach this plant! Scientists are looking for a solution that destroys the root system. Hand pulling, digging, and tilling can only work if the entire root system is dug up, but digging may increase the number of plants if any roots are left in the soil. Scientists have found that a few species of flies, fleas, beetles, and borers from Europe and Asia that eat the plant have been somewhat successful in controlling leafy spurge in Wisconsin. Some chemical herbicides can help control it as well.