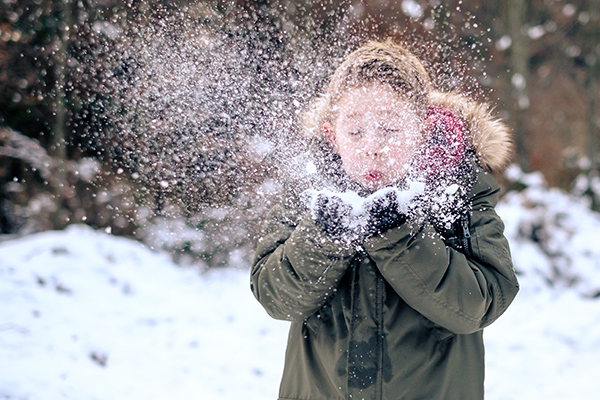 Snowflakes are one of the best things about winter. You can do all kinds of things with them like catch them on your tongue, watch them dance in the air and look at them on your sleeve. When they are packed together, you can make a snowman, snowball, or snow fort. You can go sledding or skiing across it. Snow also gives us clues as to the animals that have been cutting through our yards and where they're going. You can follow their tracks.

Have you ever wondered how snow is formed and how many kinds of flakes there are? In the late 1800s, a man named Wilson Bently, sometimes called "Snowflake Bentley," loved winter and studied snowflakes. He spent his life trying to take pictures of snowflakes. People thought he was a bit strange. Finally, on January 15, 1885, he was able to take a picture of a snowflake through his microscope. He ended up taking more than 6,000 pictures of snowflakes in his life. He proved that no two snow crystals are alike. Actually, the chances of two snowflakes being exactly alike are about one million trillion (that is a 10 followed by 17 zeros-try writing this out). Meterologists think that there are one trillion, trillion, trillion (a 10 with 35 zeros) different types of snowflakes. "Snowflake Bentley" became world famous for his discovery, but not until years later.

A snowflake starts out as three ingredients, water vapor, ice crystals, and dust. Ice crystals form when water vapor freezes on a microscopic piece of dust. This dust can come from volcanoes, flower pollen, meteorites, soil erosion and much more. Snow begins forming in a very cold cloud that has both super cold water droplets and ice crystals. When water vapor droplets collide with a piece of already formed ice crystal, the droplet freezes to it making it grow into a slightly larger new ice crystal. The shape of the snow crystal is determined by the temperature in the cloud. The size of an ice crystal is determined by moisture in the cloud. The more moisture there is, the bigger the crystals will be. When many ice crystals stick together and fall, they are called "snow crystals." This is what we call a "snowflake." As it falls from one cloud, it will pass through other clouds with a different temperature or moisture level and change shape and size of the snowflake. It may combine two different shapes. The speed of the snowflake falling can also change the shape of the crystal.

Despite all these changes happening as the snowflake falls, you can still find single ice crystals in any snowfall. Sometimes, when it snows lightly, the air will twinkle with single ice crystals that drift slowly down to earth to make a deep blanket of snow. There are 7 main types of ice crystal shapes but as we know, they can change shape as temperatures change in the air, or if they combine with other ice crystals of another shape.

Find a piece of black construction paper or a dark piece of fabric and take it outdoors to collect snowflakes. Take a closer look and see how snowflakes are shaped. Notice that all ice crystals are hexagons (six-sided). There are seven types of ice crystal shapes. See if you can spot individual crystals next time it snows.