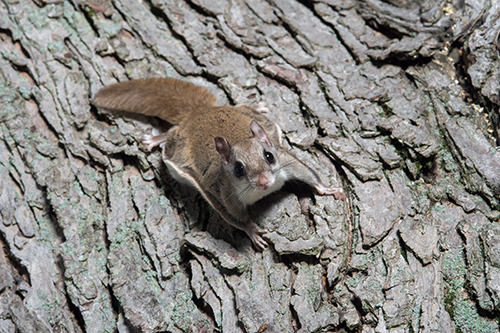 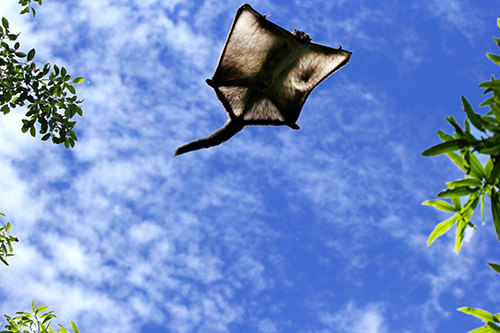 The northern flying squirrel has kind of a flat body, particularly when it extends its legs and the skin attached to them. It has large eyes. Its fur is kind of cinnamon colored on the backside. The sides of the face, under the ears, and the neck are a pale gray. Its belly is whitish to pinkish cinnamon. It is also pretty small, growing to about a foot long and weighing between 4- 7.5 ounces.

The flying squirrel is nocturnal--active at night. Since it's on the move at night, you're not likely to see one. Although, it has been known to check out a campfire or cabin light in search of food. You might also hear one rummaging in the trees or on the ground for food. If left undisturbed, the flying squirrel will stay in its nest during the day. The nest, used as a resting place and home during the winter is usually in a tree cavity (a woodpecker hole or natural cavity.) The nest may be anywhere from the surface of the ground to 50-60 feet up.

The flying squirrel doesn't really fly. It gets around by "volplaning." It climbs high in a tree, then leaps with legs extended and its patagium (the fold of skin that extends from wrist to ankle) outstretched, gliding in a descending curve towards another tree. At the end of its glide it swings upward and lands head up on a neighboring tree. It repeats this move over and over as it moves about. It can glide anywhere from a few feet to 150 feet! Not bad for a little 12-inch squirrel! The northern flying squirrel also hops around quite a bit on the ground. 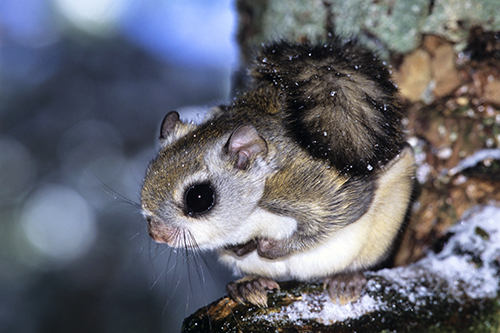 This small squirrel eats nuts and seeds--hazelnuts, beechnuts and spruce, balsam and maple seeds. It also likes the fruits of pin cherry, juneberry, huckleberry, and mountain ash. Like most squirrels, it loves mushrooms and other fungi. Late in the winter and early spring when food is scarce, it will feed on the buds of trees. It also likes to eat raw meat and has been known to eat young birds.

The flying squirrel needs to be on the watch for house cats, foxes, weasels, martens, great horned owl and goshawks. These predators will make a meal out of this little squirrel.

If you're camping this summer and you think you see something gliding from tree to tree, keep watch. You may get a visit from a northern flying squirrel.