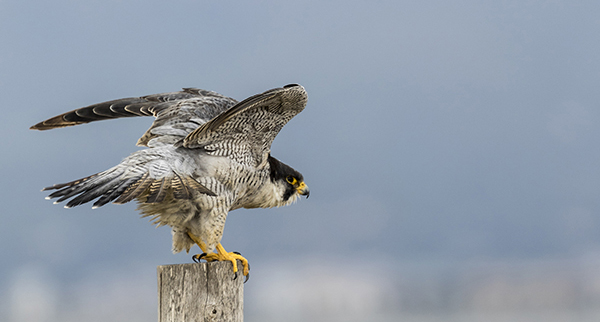 Faster Than A Speeding Bullet?

Imagine a bird that wears a black cap, has sideburns, a blue beak, yellow feet and can fly over 200 miles per hour This might sound like a bird from a crazy detective or superhero cartoon, but it actually describes a cunning and powerful bird that can strike and capture other birds in mid-air! This bird is called the peregrine (pair-a-grin) falcon, and it is endangered in Wisconsin. There are very few nesting pairs in the state. Most peregrines seen in Wisconsin are just passing through as they migrate between their summer breeding sites in Canada and their southern wintering areas. But, there are some nesting spots in Wisconsin.

The Latin name "peregrinus" means "wandering." Peregrine falcons can be found worldwide, in every continent except for Antarctica. When mating, males impress the females in a courtship show of aerobatics and "wichew" calls from mid-air. Pairs return year after year to use the same nesting ledge, called an eyrie. They prepare a saucer-shaped depression in loose soil, sand or grass called a scrape, in which to lay 2-4 eggs. No "nest" is built or used. Believe it or not, one ledge on an island off Wales in the United Kingdom, has been used since the year 1243!

Here's What to Look For

Peregrines are about the size of a crow. They have markings which look like a black cap on the head with a black streak leading down the cheek from the eye. They have a white chin and light brown breast barred with small brown "v"-shaped marks. Take a close look at the picture to see these markings. If you are lucky enough to get close, you'll see that the peregrine's eyes are dark brown with a yellow eye ring, and they have a slate-blue hooked beak. Watch for the yellow legs and strong feet, used to scoop small or medium-sized birds right out of the air for a meal. In flight you'll notice their pointed wings.

Native to Wisconsin, peregrines originally nested along the bluffs of the Mississippi, St. Croix and Wisconsin rivers, and along the Door peninsula.

What Happened to Them? 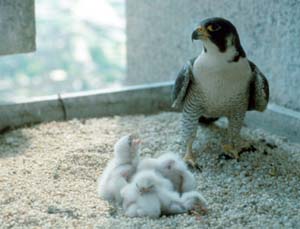 Pesticides caused a decline in the number of peregrine falcons. In Wisconsin during the mid-1950s at least 24 eyries were being used by peregrines; then their population dropped rapidly. It took biologists 20 years to discover that the highly toxic insecticide DDT was the cause. DDT was sprayed on plants to rid them of harmful insects. Insects and birds were both affected by DDT. DDT was passed through these animals in the food chain and the toxin eventually reached the peregrine falcon. DDT in the peregrine's system caused females to lay eggs with very thin shells which didn't survive or were crushed when incubated. Some birds' behavior even changed due to the chemicals and they stopped feeding and caring for their young. Because of this toxic contaminant, many chicks never hatched. By the early 1970s, there were no nesting pairs of peregrines in the Eastern United States.

The Road to Recovery

In 1971, Wisconsin realized the seriousness of this chemical threat and became one of the first states to ban the use of DDT. The federal government banned DDT the next year. Chemical residue remained in the environment so recovery of the birds in the United States was slow.

Biologists bred falcons in captivity to help restore their numbers in hopes of letting peregrines go back into the wild to repopulate areas they once lived in. This type of project involves much more than just turning a bunch of birds loose on a cliff. The birds are "hacked," a technique by which chicks are provided with food and shelter at a release site (such as a cliff or tall building), until they become familiar with it and old enough to leave the nest to hunt on their own. When they fledge, biologists hope they will find a mate and return to nest the following year. Hacking is not easy though, sometimes chicks die from predation from great horned owls or raccoons. Many states have had some success, including Wisconsin.

Peregrine falcons were placed on the Wisconsin Endangered Species List in 1975. Their population growth started out slow, with several eggs being eaten by owls or other predators. Today, Wisconsin has several locations where biologists have hacked chicks and they have successfully bred. In 1997, seven sites were active with eggs being laid. Today, there are many more active breeding sites as seen in the list below. Nest sites are located on buildings, smokestacks and cliffs on the lake Michigan shore, along the Mississippi River and other suitable sites. Look below to find some of the sites which have had nesting peregrines. Find the one closest to where you live or look on the Web for Wisconsin "peregrine cams." Look for these cameras in the spring and you can follow the young falcons from egg to fledging as they leave the nest. Maybe you will see them soaring in the sky nearby.

Many nesting sites can be found along the Mississippi in Wisconsin, Minnesota and Iowa on the rocky cliffs overlooking the river valley. For a complete list, visit The Raptor Resource Project web site. (Leaves EEK)