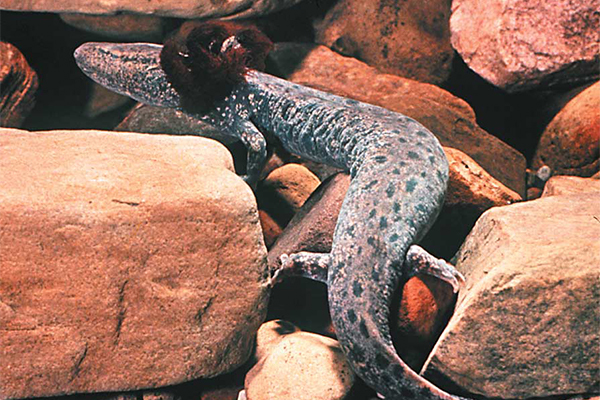 You'll never walk this critter on a leash because the mudpuppy isn't a dog and it doesn't live on land. This salamander lives its whole life in the water of lakes and rivers. It prefers areas with large flat rocks but will also live in areas where riprap (piled boulders) have been placed. The mudpuppy will use underwater holes in riverbanks as a home.

It is pretty easy to identify this salamander. It has bushy, feathery, deep-red gills. Its back is usually rusty brown or gray with scattered dark spots. There are four toes on each foot and the tail is finned. It is the largest Wisconsin salamander. If you touch one, you'll notice that it is very slimy--this makes it hard for predators to get a hold of it. Rumors that mudpuppies are poisonous aren't true.

Mudpuppies eat aquatic invertebrates (no backbone) like worms, small fish, and other amphibians.