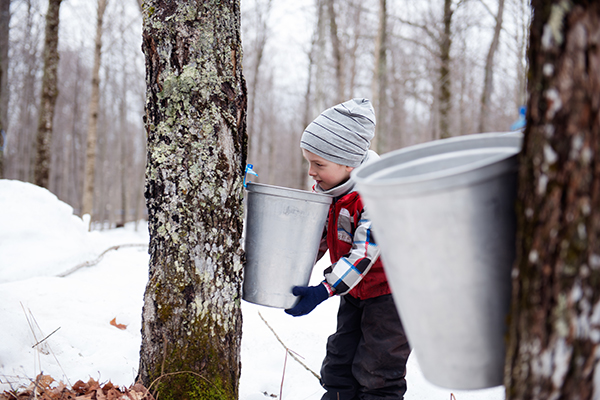 Imagine yourself eating a tall stack of pancakes dripping with golden brown maple syrup. Did you ever wonder where this sweet maple treat comes from? Genuine maple syrup is made from nature, from the sap of maple trees, harvested in the late winter and early spring. If you buy your syrup from the grocery store, however, it's most likely made of artificial maple flavoring. Look at the label to find out. If you haven't tasted the natural sweetness direct from the maple tree, try some real maple syrup made right here in Wisconsin. Here's how the whole tradition started:

A sap run is the sweet good-bye of winter. It is the fruit of the equal marriage of the sun and the frosts. - John Burroughs, Signs and Seasons, 1886

Spring brings us the season of sap flow. Most people look for the robin as the sign that spring has finally arrived. Native Americans knew that spring came much earlier. They set up "sugar camps" in the early spring when sap flows from tree roots into trunks, breathing life back into the trees. They knew that sugaring time had arrived when streams began to trickle, animals awoke from their wintry slumber for a stretch, and icicles began to drip. Even the red squirrels knew and pierced the bark to drink the sugary sap. This magic flow inside the tree was (and still is) triggered by cold nights below freezing and warmer days with temperatures pushing above the freezing mark into the 40s.

The Chippewa, Menominee, and Winnebago tribes of the Great Lakes region awaited this time of year for centuries. It meant the harvest of an important and tasty resource. The Native Americans would move their tribe's people to the sugar camp to harvest the sap. First, they tapped the tree with a spout made from a reed or a hollow twig. Then, they collected the dripping sap in a trough made from hollowed out branches. Finally, they collected the sap in containers and heated it over an open fire until it thickened into syrup or turned to sugar. The Chippewa used the sap as a tasty sweet drink, syrup, and candy. The Menominee made maple sugar and used the syrup as a seasoning much like we use salt. Winnebagos sweetened their food with syrup and used the sap as sugar. One of the best times of the year for most tribes was during "sugaring" time as people came together with family and friends at the maple grove following a long winter. They enjoyed the spring with games, fun, and the harvesting of sap. Syrup was not only a tasty treat, it was also valuable to the Native Americans as a trade item with the early settlers. Eventually, the settlers were taught the traditional ways of making syrup and began producing their own supplies.

Have you ever heard the term "sugar bush?" This means an area where maple trees grow abundantly and provide an area for maple sugaring, probably the same locations the Native Americans used as "sugar camps." Sugar maples have the greatest amount of sugar in the sap to make syrupout of, but you can also tap red and silver maples, box elders, and birch trees. An average maple will produce about 20 gallons of sap in the spring, which only amounts to 2 quarts of syrup. Most of the sap content is made up of water. Traditionally, the sap was boiled down over a hot fire for up to 5 days to get the thick liquid that we know as syrup. You can tap sugar trees yourself and try this traditional method of making syrup. Experts recommend using about six trees for your first maple sugaring experience. This will give you nearly a gallon of syrup. It takes a lot of work, but the rewards are sweet!

Syrup isn't made the traditional way much any more. Many people use the invention of "gravity flow" systems which funnel sap from the tree right into a holding tank where the impurities are taken out. Then the sap is boiled in large vats. Voila! You have syrup.

Why not take part in a traditional maple sugaring celebration in Wisconsin to see first hand how to make this golden treat? Maple sugaring demonstrations and family-owned maple syruping operations can be found all over Wisconsin. There's probably one near you since sugar maples grow throughout our state. Sugar maple trees are so popular in fact, that the sugar maple has been named our state tree. Check it out.

Try out some maple syrup recipes.