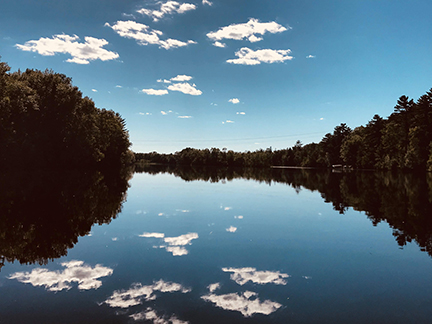 Flip back in time to 1972...Wisconsin's waterways were in serious trouble. An increase in people and manufacturing, along with the use of laundry detergents with high phosphate levels were overwhelming some wastewater treatment plants. A large amount of waste was discharged into lakes and streams. Many of Wisconsin's industries, the dairies, breweries, papermakers, and vegetable canneries were big water users that also sent their wastes into Wisconsin waters. Some waterways became wastelands of smelly water and floating sludge. All over the country people were concerned about how we use water and they let their representatives in Washington D.C. know it. The result was the Clean Water Act and its goals of making water "fishable and swimmable."

In 1972, Congress passed this law to help protect and restore the lakes, streams and rivers of this country. The goals of the Clean Water Act were simple--water should be clean enough for fishing, swimming and other recreational uses. Discharges of pollutants were to be eventually eliminated. Factories and waste treatment plants were no longer free to get rid of their wastes in the nation's waters. They had to get permits, limiting the pollution they could release. They also had to keep track of their waste discharges and report on their efforts to reduce pollution. The act authorized money to go to cities and towns to help them upgrade their treatment plants. People looked for new ways to reduce discharge from factories.

Can we see the results of this law today? Yep, fish now swim in parts of the Wisconsin River where 35 years ago there were none. The smelly water and floating sludge is gone. Along the Milwaukee River there are now restaurants where people sit outside to eat next to a river that used to stink. Now, that's progress!

And, so we say, "Hurray for the Clean Water Act."

The Clean Water Act went a long way in cleaning up our lakes and rivers, but there's still more to be done. You can help keep us on the path to cleaner water by taking on some of today's water pollution challenges.

Mercury in Homes and Schools
Round & Round It Goes! The Water Cycle
Follow the Path to Cleaner Water
Water Facts and Conservation Tips