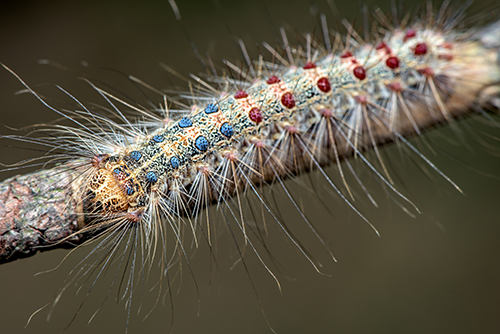 1869 - The gypsy moth was introduced to North America by Professor L. Trouvelot in a misguided attempt to breed a hardy silkworm. Some insects escaped and were soon established in a vacant lot next to his home in Medford, Massachusetts.

1890-1900 - In spite of control efforts the gypsy moth spreads through many parts of Massachusetts.

1920 - Gypsy moth was again introduced into the United States. It came to New Jersey on blue spruce trees imported from the Netherlands.

1948 - Gypsy moth was thought to be eradicated in Pennsylvania.

1960-70 - Gypsy moth populations rise and fall in various infested areas, but the spread of the moth continues slowly.

1979 - Noticeable damage from gypsy moth is recorded in Maryland and Delaware.

1991 - Gypsy moth inhabits all the New England and Atlantic States south to northern Virginia and states west into eastern Ohio and Michigan.

1997 - Wisconsin records its first defoliation--a two-acre patch of shrubby willow in Oconto County. In Wisconsin, gypsy moth inhabits counties bordered by lake Michigan from Kenosha through Door County and up to Oconto and Marinette counties.
1998

1998 - Westward expansion of gypsy moth range in Wisconsin continues. Gypsy moth spread has been rapid in populated areas where oaks are the dominant trees between Milwaukee and Madison and in Waushara, Waupaca, and Portage Counties.

2002 - Wisconsin's gypsy moth suppression program expands to 36 sites in nine counties. Approximately 5,900 acres are sprayed. More than 30,000 acres of moderate to heavy defoliation (leaf loss) are seen in northeast Wisconsin and scattered places in central and southeast Wisconsin.
gypsy moth spread as of 2002

Back to the Gypsy Moth Story.