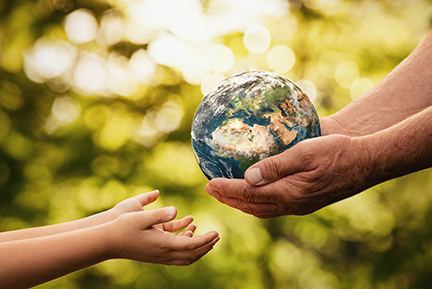 Global warming is a hot topic (no pun intended). The Earth is warming up. While that may be hard to believe in the middle of a Wisconsin winter, if it's true it could mean big changes for our planet. For more info on this topic, browse on!

How do you keep a whole planet warm?

Light from the sun warms land, water, and air. In turn, the warmed-up land, water, and air give off heat, which rises up toward the sky. Gases in the Earth's atmosphere capture some of that heat and prevent it from escaping into space. This heat trap keeps the ground, oceans and air at fairly stable, predictable temperatures -- warm enough to allow thousands of plant and animal species (including humans, like us) to thrive.

Without heat trapping, the earth's surface would be about 60 degrees Fahrenheit colder than it is now. If you're living in a place like Wisconsin, that means you'd have to wear boots and a heavy coat in July. BRRRRR! (We won't even talk about January!) The earth's overall temperature has changed often across the eras -- the long periods of time we use to measure the Earth's age. We know this because paleontologists have studied the fossils of plants and animals, and because geologists can read the earth's history in rocks and soil. In hotter eras, dinosaurs clomped across warm green landscapes filled with plants. In colder eras, the wooly mammoth survived in rugged terrain of ice and snow.

For the past 10,000 years, the earth has had relatively stable temperatures. But, for the past 150 years or so, scientists have noticed the Earth is warming up more than usual. This phenomenon is called global warming.

What is the greenhouse effect?

You now know the Earth's surface and atmosphere stay warm when gases in the air trap heat from the sun. Have you ever been inside a greenhouse, the all-glass buildings where plants are grown? They're very warm, because the glass walls allow the sun's rays in but prevent the heat from getting out.

Think of the earth as being inside a giant greenhouse. The gases act like a greenhouse's glass walls -- they keep heat from escaping into space, and the earth stays warm.

Try this easy experiment: Take two jars and put a teaspoon of water in each jar. Put a lid on just one jar. Place both jars in a sunny spot. After a few hours, check on the jars. You'll see that the open jar hasn't changed, but the closed jar will be steamy and hot inside. What happened? The heat from the sun could not escape from the closed jar.

The main gases that cause the greenhouse effect are:

Many scientists expect the increase in greenhouses gases will raise the average global temperature of the planet by 2 to 9 degrees Fahrenheit over the next 50 to 100 years.

Most of the increase is due to human activities, like:

If Earth gets hotter, some of the following changes might occur:

Global warming: It is more than just a game of up-and-down on a thermometer.

There's a lot of debate going on about global warming. Some scientists say it's nature's way -- something that has happened in the past and will likely occur again. Others say global warming is occurring faster because of human beings and that human beings can stop it, or slow it, if they so choose.

One thing is certain: We do not yet know enough about how Earth works to accurately predict what the increase in greenhouse gases caused by humans will do to the planet. The relationships among land, water, air, plants and animals do not follow a simple pattern, where one action automatically leads to the same result.

For instance, an increase in carbon dioxide (the main greenhouse gas) may warm the Earth, and with the greater warmth more trees might grow. Trees absorb carbon dioxide to make wood and grow larger. With more CO2 captured in trees and less CO2 in the atmosphere to hold in heat, the Earth would cool down. Right? On the other hand, trees are also very good at trapping the sun's heat. So with more trees, the Earth would get warmer. Right?

We really don't know for sure. After all, the Earth is a big place -- a place that's worthy of your attention and study. Perhaps someday you'll unlock yet another of Earth's secrets.

YOU can help slow global warming!

Just because we're not absolutely certain of how more greenhouse gases will affect the Earth doesn't mean we should sit back and do nothing.

Besides increasing greenhouse gases, burning too much gasoline and other fossil fuels creates air pollution and wastes energy. Who wants to breathe bad air, or always look up at a dirty sky?

You can help slow global warming by:

Era: The longest division of geologic time, measured in millions of years.

Fossil fuels: A fuel such as oil, which comes from decomposed living matter from another geologic era.

Geologist: Someone who studies the origin and structure of the Earth.

Greenhouse gases: Gases that trap heat in the atmosphere. They include water vapor, carbon dioxide (CO2), methane and nitrous oxide.

Paleontologist: Someone who studies fossils, such as skeletons or leaf imprints.