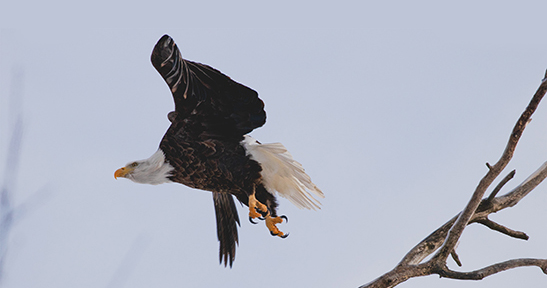 Did you know that plants and animals can give us clues about pollution in our air, land, and water, before humans even notice that something is wrong? Even lichens (an unusual plant, made up of a blue-green algae and a fungus) and birds can tell us about air quality. In Wisconsin, common milkweed is a good plant to study because it is affected by ozone and it grows in a lot of areas.

Biomonitoring is the term scientists use to describe the use of plants, animals, or entire ecosystems to tell if our environment is polluted. Biomonitoring has been used by biologists and scientists to give us information about our surroundings for a long time. Here are three examples.

Canary in a coal mine

In the 1800s few jobs were harder or more dangerous than working as an underground coal miner. Over the years, thousands of men, women, and even children were killed in mine accidents. One common cause of the accidents was a build-up of dangerous gases like methane and carbon monoxide in the mine shafts. Large amounts of these gases could lead to violent explosions. Methane and carbon monoxide have no color and no odor. The miners of the 1800s didn't have the special equipment scientists have today to measure chemicals in the air, so it was impossible to tell if the gases were building up to dangerous levels. Miners started to use canaries to test the air quality in the mines. Canaries are very sensitive to carbon monoxide. The canaries would chirp and sing and make noise all day long. But, if the carbon monoxide levels got too high, the canaries would have trouble breathing, and maybe even die. When the canaries were no longer singing, miners would know that the gas levels were too high. They would leave the mine quickly to avoid being caught in an explosion. This is how canaries acted as a warning system for miners. Have you heard the phrase "canary in a coal mine"?

Eagle populations dropped in the 1960s, leading to the discovery that certain pesticides can build up in the food chain and change natural systems. Eagles began to lay very thin-shelled eggs. The eggs often broke, or if they hatched, the chicks were often weak and died within a few hours or days. It looked as if eagles might become extinct. Scientists studying this problem began to wonder if the chemicals that were harming eagles might be able to harm humans and other types of animals. The scientists told their concerns to the government and new laws were made to stop the use of many harmful chemicals. After a few years, eagle populations began to improve. Read more about the bald eagle.

One way we can learn more about air pollution is to study a type of plant that is very sensitive to air pollution. Milkweed is one of these plants. It shows signs of damage from ozone by showing stiples, or dark polka dots, all over the leaves; losing leaves; turning strange colors; or not growing very big.

Find out more about ozone damage to milkweed.

Adopt-a-beach
Gaylord Anton Nelson
How to Plant a Tree
Pearl Louise Pohl
Do You Have a Blue Thumb?