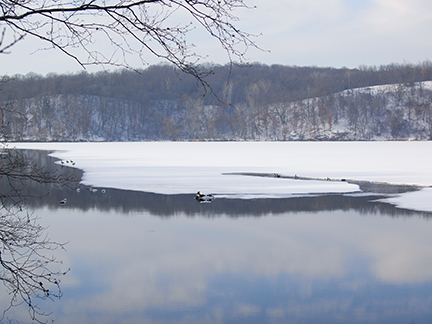 January 21st "Playing in the Snow"

We got 8 inches of snow last night! The park sure looks peaceful with all that new snow. Since I am the only one working at the park today, I arrive extra early, at 4 o'clock in the morning, to plow the snow off of the roads. This way I'll still have time to groom and track the 5 miles of cross country ski trails before too many park visitors come out to ski on them.

The smooth snow sparkles in the headlights as I drive the snowplow through it for the first time. Three hours later, I'm parking the snowplow in the garage. I'll bet I drove that plow up and down the roads and parking lots a hundred times. At least the skiers can now drive to where the ski trails start without getting stuck in the snow. By the way, those skiers are already calling on the park phone and asking "Are the ski trails groomed yet?" I guess they think more people are working at the park today than just me.

I pass several people already skiing in the early morning. I see one person hiking on the ski trail and ask them to stop hiking right there because hiking messes up the snow and people can't ski on it anymore. This trail is open to hikers in the summer but used only for skiers in the winter. He said he didn't see the sign at the beginning of the trail that tells you not to hike here. I groom over his footprints after he leaves, so people can ski on that part of the trail again. It takes me about 2 hours to go around five times to groom the whole 5 miles of trails. My arms are tired from steering that big snowmobile for such a long time.

Back at the garage, I put on my ranger uniform and head out into the park in the patrol squad car. I stop at the shelter building to clean the restrooms and to make sure the furnace is working on this cold morning. I check in with two ice anglers coming off of the lake to make sure that they have fishing licenses. They caught some nice sized perch this morning, I bet those will taste good! On my way back to the park office, I check several cars in each of the parking lots to make sure that they have stickers on them which shows me that the owner paid to use the park. I write notices and place them on the windshields of those cars without park stickers. This is not a ticket, but a notice that reminds the owner to stop and pay later at the park office.

I spend the rest of the day, until 4 p.m. at the park office. I shovel the sidewalk and fill the brochure boxes. I sit down at the computer to type "thank you" letters to volunteers who helped us seed a prairie in the park this past fall. I almost don't finish typing these letters because so many people come into the office to buy park stickers and ask questions about skiing and ice fishing. The phone keeps ringing with people asking if the ski trails are groomed. This time I can proudly tell them, "Yes they are!"

Back to Diary of a Park Ranger

Everything you need to know about ice fishing