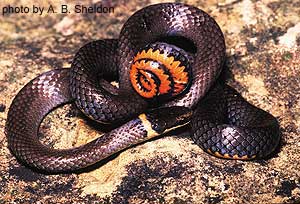 This small, 14-inch snake is found in Wisconsin's prairies in the southwestern part of the state. You'll also find it in prairie habitats in southeast Minnesota and from South Dakota down to Texas. In the prairie habitat, it prefers to live under rocks, inside logs and underground in dry areas. Because it's cold-blooded and relies on the sun to warm up, it lives on the warm southwest sides of bluffs along Wisconsin's major river valleys in the spring and fall. During the summer, it looks for wet places away from the hot sun. It can also be found in burrows. It is active mostly at night during the summer months.

Can you guess where this snake gets its name? The prairie ring-necked snake is blue-black on its back and has a bright yellow-orange ring around the back of its neck. The underside is yellow-orange with a bright red-orange tail with black half-moon spots on the underside. This bright coloration is used as predators approach. The snake will coil and bury its head inside, then raise the bright red-orange tail in the air and wave it around. This is a decoy, luring the predator to attack the tail instead of its head, giving the snake a chance for survival.

These nocturnal (active at night) snakes munch on insects and invertebrates like: spiders, sowbugs, and slugs. They also like salamanders, small snakes, and frogs. Prairie ring-necks must watch out for their number one predator, the North American (blue) racer, another snake.