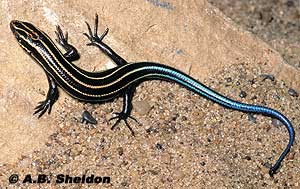 Lizards in Wisconsin? Yep. When most of us think about lizards and where they live, Wisconsin probably doesn't come to mind. Most people think of lizards in dry, hot places like in the southwestern United States. But, Wisconsin does have lizards--four species to be exact. Compare this to Arizona with 47 species.

Wisconsin's lizards are dependent on sandy soils. Sandy soil habitats tend to be warmer and drier than other soils. These areas where the temperature is slightly warmer allows lizards to survive this far north. You've probably never seen one of these critters. They're fast and pretty secretive. But, you never know when you might come across one, so its best to learn a little something about them and see what they look like. Read on for the "lowdown on lizards."

Like snakes, lizards belong to the animal kingdom, phylum Chordata (animals with backbones--also known as vertebrates). They are reptiles. Wisconsin's four species of lizards represent three of the lizard families. There are the skinks (two species); the glass lizards (one species); and the whiptail lizards (one species).

Lizards are the most diverse group of reptiles. There are more than 4,600 species worldwide. (That's a lot of lizards!) They range in size from the 0.6 inch dwarf gecko discovered in 2001 on an island in the Caribbean, to the giant Komodo dragon from the Indonesian island of Komodo that can reach 10 feet in length and weigh up to 200 pounds.

Just like snakes, lizards are ectotherms (ek-TOE-therms). They rely on their surrounding conditions to control their body temperatures. They prefer higher temperatures than other reptiles, which is why you find so many different lizard species in deserts.

Wisconsin's four lizard species have several things in common. They all lay eggs, and the hatchlings look like tiny versions of the adults, except that the three species with legs hatch with blue tails. All four require sandy soils for burrowing and hibernating. Lizards spend at least seven months of every year in a dormant state underground. They emerge from hibernation in late April or May and re-enter hibernation in early September. Since they're only active for 4 or 5 months, they have to put on weight and successfully reproduce quickly.

With the exception of the slender glass lizard, which doesn't have legs, lizards have toenails at the tips of their digits. Salamanders, which some people mistake for lizards, don't have toenails. Lizards also have a pretty unique survival trick. They can drop their tails as a way to escape predators who grab them.

Lizards, like snakes, are covered with dry scaly skin. Scales help reduce water loss and increase a lizard's ability to take in solar heat. The two species of skinks in Wisconsin both have shiny, similar-sized overlapping scales covering their bodies. The prairie racerunner has small body scales and large, rectangular belly scales that are like those found on snakes. The slender glass lizard has small scales containing bony plates. This gives extra protection to its limbless body.

Most lizards have patterns that help them to blend in with their surroundings. Some species, such as the common five-lined skink, undergo a change in pattern as they mature.

Many male lizards undergo color changes on parts of their bodies during the breeding season. In Wisconsin, male common five-lined skinks develop orange-red colored heads; male prairie skinks develop bright orange throats, lips, and chins; and male six-lined racerunners turn a bluish color on their chins and bellies. It's all a way to draw attention. These bright colors are used to warn other males that a breeding territory is taken and to attract females. Some lizards, like chameleons and anoles are known for their rapid color-changing abilities.

Wisconsin's lizards breed shortly after emerging from hibernation. About a month after the eggs are fertilized, a female lizard will lay her eggs. They will incubate for anywhere from 30-60 days, depending on the weather.

Lizards lay their leathery-shelled eggs in moist place because the eggs need to take up water as they develop. In some species, the females leave their eggs after they are laid. Females of both Wisconsin skinks and the slender glass lizard remain with their eggs. A female will curl itself around the eggs to keep them moist and she may occasionally turn them. If the eggs become too cool, the female may go out and bask in the sun, and then return to warm her eggs.

What's on the Menu?

Lizards protect themselves from predators by not being seen. Most are well camouflaged, blending in with their surroundings. They also avoid detection by spending much of their time under rocks, bushes, or other suitable cover. Lizards that live in the desert will often flatten their bodies against the ground to eliminate their shadow.

If a lizard is detected, it usually flees fast to escape. Six-lined racerunners have been clocked at up to 18 miles per hour. Not bad for a critter that is only 6-9 inches long. Most lizards have one or more retreats, usually burrows that they can return to for safety. Many smaller lizards will inflate their bodies, elevate their bodies by extending their legs, or do a series of quick push-ups all in an effort to scare off predators. As a last resort, a lizard may turn to face its attacker. Sometimes it will even jump forward in a show of aggression and bite its attacker.

Here's a fun fact. Horned lizards, found in the southwestern United States, are able to squirt blood from their eyes at a distance of up to seven feet! Some predators don't like the taste of blood (imagine that!) so they'll abandon an attack if they are squirted in the mouth or eyes. 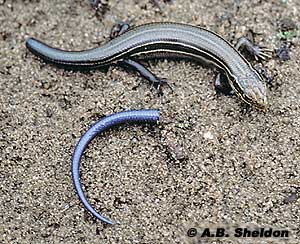 Many lizards have the ability to discard all or part of their tails. This is called autotomy. Special muscles cause the tail to part from the body and continue to wriggle. This defense strategy can save a lizard's life. When the tail is discarded, or cut off by a predator it will wriggle wildly. This often distracts a predator allowing the lizard to make an escape. The fortunate survivor will begin to regenerate a new tail, although it will never by as long or useful as the original. You can tell if a lizards tail has been regenerated. It is patternless and obvious. Most lizards can lose and regrow their tails over and over. But, regrowing a tail uses lots of energy. It can result in slower growth of young lizards and can result in fewer or no egg production in females until their energy stores are rebuilt.

The Future for Lizards

Unlike the large desert landscapes of the southwestern United States, the habitats that support Wisconsin's lizards are limited both naturally and by a growing human population. The slender glass lizard, which calls the central Wisconsin sand plain its home, is an endangered species. This lizard's range in the state is like an island. It is separated from the nearest population in Illinois by more than 100 miles. Changes in habitat because of agriculture and a maze of roads breaking the habitat into small islands have caused the lizard numbers to decline. The slender glass lizard has great difficulty crossing paved roads because of their smooth bellies. They can't use their belly scales like snakes do for locomotion. When one of these lizards gets itself out onto a roadway, it is likely to meet up with a vehicle or a red-tailed hawk who spots it out in the open.

You can help out Wisconsin's lizards. Check out some tips at "Ways You Can Help Turtles and Lizards."