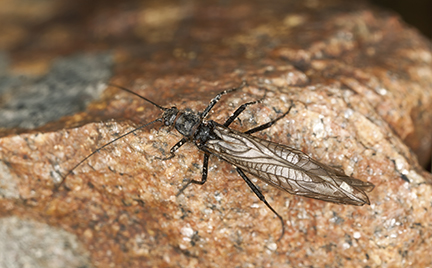 Can you imagine living your whole adult life and not eating anything! That s how many adult stoneflies live. This large insect has see-through, brownish wings which fold over its back, two long antennae and two tail filaments. The young or nymph lives mostly in clean, flowing water with lots of oxygen. The stonefly nymph can be told from the mayfly nymph by its two tail filaments. The stonefly nymph's gills are unusual. You will find them as tufts attached to each leg. As oxygen decreases in the water, stoneflies will do "push-ups" to increase the amount of water going over their gills. A meal of algae and dead plants is relished by some stonefly nymphs while others feed on animals, especially on mayfly nymphs and blackfly larva. Stoneflies are one of the trout's favorite food.