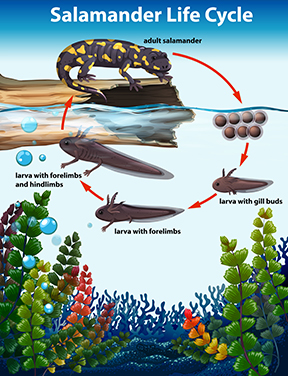 A tadpole with gills! No, it's not a mutant; it s a salamander larva. In a few weeks, it will lose the gills, get flecks and spots and crawl out of the pond. Unlike frogs and tadpoles, salamanders have teeth. They're hungry carnivores so teeth help them catch their prey of fairy shrimp, mosquitoes and other insects. The adult salamander can be found under damp logs, in leaves and even deep underground where it feeds on worms and other soil invertebrates. Salamanders are active at night. Watch for them in early spring when they mate with much tail thrashing and rolling in the water. Learn about the tiger salamander or the redback salamander.