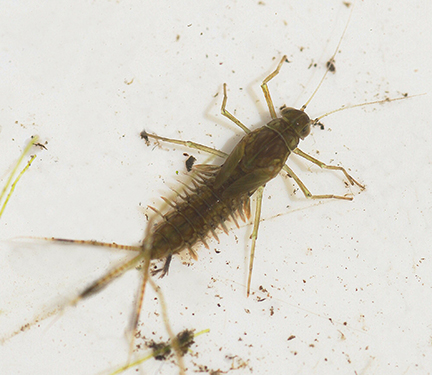 The mayfly and damselfly nymphs look almost like twins, because they are both long, skinny and usually have three tails. The mayfly though, has rows of feathery gills along its side between the legs and its three tails. The young feed mostly on small plants. They are sometimes considered to be the "cows" of the stream since they graze on algae on rocks.

There are many different kinds of mayflies. How many did you find? The burrowing mayfly is unique. It has a large humped back, digging front legs and beautiful feathery gills. It gets its name from its habit of digging into the soft mud and silt at the edges of streams. The adult mayfly doesn't eat anything during its short life of a few hours to a few days. As an adult, it mates, lays eggs and dies. Mayflies often swarm in huge numbers near water.