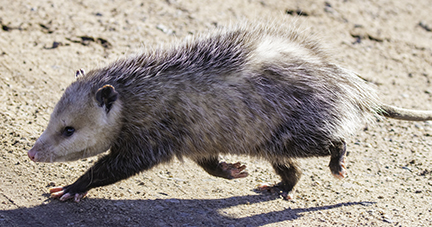 Have you ever heard of "playing 'possum"? Opossums are known for playing dead when predators are nearby or attack. The opossum is so good at it that it could win a creepy contest when it falls on its side, becomes limp and motionless, while the front feet ball up. Drool then comes out of its mouth and it poops with some extra green smelly mucus. Who would want to stick around this scene? Yuck! They are tough. Even if the opossum is further attacked, it won't show any signs of suffering.

This mammal, the size of a large house cat, is usually seen waddling slowly and awkwardly in woodland areas near streams, marshes, farmland and even your yard after dark. You can find them across Wisconsin except for the Northeast part of the state. The opossum has sparse coarse light gray fur. Look for their short legs, long scaly tail, large round and hairless ears, cone-shaped head and pointed snout with long whiskers. Males measure around 36 inches long at six to twelve pounds; females are shorter and weigh around four to seven pounds.

Opossums have feet there are specially adapted to grabbing things because of their human hand shape. Their front feet have five toes that all look similar. Their unique long hairless tail also helps them grab things like branches in trees where they like to "hang out" much of the time.

Opossums are also the only marsupial in North America, which means they have a pouch on their abdomen where their young are carried and get milk. Believe it or not, they are relatives of the Australian kangaroo! In Wisconsin, they mate in March and are born after only two weeks. Opossums have from three to 25 young that must climb three to four inches upward into the pouch where they compete to attach to a nipple. About six or seven young survive and stay in the pouch until they are about the size of a mouse. Once they emerge from the pouch, the young hang onto the mother's back for a ride while she forages at night for solid foods. They remain with their mother for three or four months.

During the daytime, opossums hide in hollow logs, trees, brushpiles, road culverts, rock and stump crevices and under buildings. Their habitat range is from 20-40 acres. They will eat almost anything including small mammals, birds, worms, crayfish,snails, frogs, insects, fruits, grains, roadkill (including other opossums!), and garbage.

Opossums fatten up on food before winter arrives, but do not spend all winter in the den. They will come out to look for food and will eat mice, rabbits, birds and garbage. Because they are not adapted to winter, their tail and ear tips sometimes freeze - ouch!

The opossum's natural enemies are cars, people and dogs. Opossums can be hunted or trapped, but they are not very valuable as food or for their fur. Rarely are they eaten by coyotes, foxes, badgers and great horned owls.

The Flying Squirrel
Fun Fur Facts
The River Otter
White-Tailed Deer
Do You Want to Be A Badger?