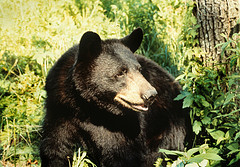 Bears have been an important part of history in Wisconsin. The Native Americans honored the bear as a supernatural being and treated the bear hunt with great ceremony and respect. They prized bear skins for robes and the meat and oil for cooking, fuel and medicines. The settlers also placed great value on bear meat and especially sought the bearskins with which they made clothing and bedding. As more settlers moved into Wisconsin, however, there was conflict between people and bears. Bounty systems were set up to encourage killing of the "noxious pests" and fur traders paid high prices for bearskins. This large-scale killing caused the numbers of bears to decrease. Logging and settlement also reduced eld the bear's habitat and numbers. In 1930, people began to protect the bear and limit hunting. Today, wildlife biologists study bear populations and their habitat. Management plans are developed to ensure that nuisance bears are relocated and that population levels remain healthy.

The black bear was Wisconsin's largest resident mammal until recently. In the last few years elk have been reintroduced to the state, moving the bear out of the largest mammal category. Adult males averages 47-70 inches long and weigh about 250-350 pounds. Female bears are smaller and weigh between 120-180 pounds and measure 50-58 inches long. Can you believe that one bear in Wisconsin actually weighed 700 pounds! Black bears have a round and short body with sturdy legs. Their rounded shape comes from a thick layer of fat under the skin and the dense, coarse hair. Their fur is usually glossy black except for a tan patch across the nose. About 25 percent of Wisconsin's bears have irregular white markings on their chests. They walk on the soles of their feet, the same as people, and have five toes with non-retractable claws. As a matter of fact, the bear's hind footprint looks a lot like a human one. Claws come in handy for hunting, climbing trees and tearing open logs in search of insects. Even though they're huge bulky animals, don't be fooled. Black bears can run over 30 miles per hour and climb a tree in a flash to get out of harms way.

These incredible hulks eat all the food they need for the year in only 6 to 8 months. You might see them out at twilight between mid-May and into late September. In early fall they gorge themselves with greens, nuts, berries like black currant, carrion (dead meat), insects and small mammals. In late fall, they stuff themselves into a cozy den and fall into a deep winter sleep, but not hibernation. Here they stay for the winter months, "bearly" breathing to keep their metabolism slow in order to survive the winter without eating.

Three-year-old females awake in January to give birth to two or three cubs, only stirring from deep slumber to nurse, tend and keep the cubs warm. If you listen carefully, you may hear high-pitched squeals coming from under the snow in the forest. These are the sounds bear cubs make in their winter den. Dens can be found in hollow trees, brush piles, rock crevices, caves, black bear cubs excavated holes in hillsides, or under upturned tree roots. They will even den in open areas like muskrat dens and let the snow cover them. They don't eat, drink, urinate or defecate all winter. They lose up to 30 percent of their fall weight by spring. When they emerge in spring, the female bear will communicate with a "woof-woof" and a whimpering sound, signaling the cubs to follow and feed on hearty foods like frogs, carrion, and insects, instead of plants and berries. Plants and berries are mid-summer delicacies that are eaten at the rate of 11-18 pounds per day.

Bears like large forested areas with swamps and streams mixed in, similar to what we have in the northern two-thirds of Wisconsin. In the last few years, however, bears have been seen more frequently further south. Bears are finding better habitat as farm fields become unused and get more woodsy. Bear populations have been increasing from an estimated 5,700 in 1985 to 12,700 in 2000. Click here to see where bears live in Wisconsin. Bears search the land for thick ground vegetation with lots of nuts and berries. They are loners. A male bear needs up to 27 square miles for his territory. A female only wanders about 5 miles from her den. You'll know where the territory is by locating a "bear tree." These are trees found along trails and other areas where bears like to visit. The tree, or sometimes a building or park sign will be repeatedly clawed, bitten and rubbed. It might even be marked by a bear's urine scent. Have you ever seen a "bear tree" at a state park or forest?

It is rare that you will come in contact with a bear unless you live near bear country or you vacation at campgrounds in the northern part of Wisconsin. Bears can be seen looking for food in places where scrap or leftover food is thrown out, such as at a dump. They are also becoming more common in suburban areas as people move their homes closer to bear habitat and bears come looking for food. Sometimes bears can damage crops or cause damage to your home or property as they search for food. Hunting seasons (Leaves EEK!) and selective control of problem bears keeps their numbers at a healthy level for both people and the bear population in general. Black bears are actually quite healthy and long-lived animals which thrive in Wisconsin.