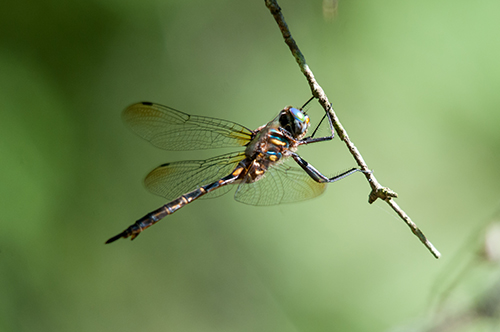 Dragonflies are a spectacular and colorful group of insects. Their shiny green, shimmering blue, and metallic bronze colors darting across an open meadow or just above the still waters of a pond are one of nature's most exciting scenes. Dragonflies are so common in Wisconsin, that most kids can identify a dragonfly when they see one.

Scientists classify dragonflies as members of the group Odonata. The Odonates include the larger, stouter true dragonflies that zip and dart about, and the smaller, daintier damselflies that flutter about at a much more leisurely pace. You can tell them apart by their wing position when resting. Dragonflies keep their wings flattened like aircraft, while damselflies hold their wings together over their backs. More than 5,100 species (kinds) of Odonata have been described and you'll find about 110 different species here in Wisconsin. They are easily recognized by their long membranous wings, huge compound eyes, and slender abdomen. Some species are easily identified "on the wing" (in flight) with the help of binoculars, but others must be held close and examined with the aid of a magnifying glass.

What many people do not know is that dragonflies spend about 90-95 percent of their lives under water as aquatic nymphs (immature stage). The nymph is a ferocious predator, feeding on other aquatic insects, crustaceans, worms, small fish and tadpoles. The nymph has a unique adaptation; its lower lip (called a labium) is long and hinged. The labium is folded under the head most of the time, but it can be suddenly and rapidly extended like an arm to grab unsuspecting prey. The labium can also give a little nip if the nymph is threatened.

Like other insects, dragonfly nymphs molt (shed) their skins as they grow larger. Dragonflies go through significant changes as they develop from the aquatic life stage into the aerial acrobat familiar to most of us. At the end of the nymphal stage, the nymph crawls out of the water and finds a dry spot. First, the nymph stops feeding and its internal mouth parts dissolve. Then, its eyes become translucent and its wingpads swell. Adult color patterns begin to develop under the skin and within a few days the nymph is basically an adult dragonfly tucked inside a larval skin. This startling metamorphosis occurs in about one week.

In Wisconsin, dragonfly nymphs change into adults at two times during the year. The spring species emerge all together in May and early June when the days grow longer and temperatures get warmer. The summer species develop at separate times and complete metamorphosis throughout late June, July, and August.

The adults are just as voracious (eating very large amounts) in their feeding as the young. Mosquitoes, gnats, flies, and other insects are their primary meal, but larger prey are sometimes eaten. There have even been reports of dragonflies trying to feed on hummingbirds! Prey are plucked out of the air when a dragonfly holds its legs like a basket and flies by, or by flying through a swarm with its mouth gaping wide open. Adult dragonflies have few predators, but sometimes frogs and birds will feast on them.

Dragonflies are extraordinary fliers, some reach speeds of 35 miles per hour. Believe it or not, they are able to outmaneuver the best human-designed airplanes. They can fly backwards, change directions in mid-air, stop and hover. Aerospace researchers are examining dragonfly flight control mechanisms with hopes of improving airplanes and spaceships.

Their aerobatics also come in handy for mating. Watching dragonflies mate is a memorable experience. A male dragonfly catches a willing female in flight with his legs and curves his abdomen around, hooking it to the back of her head. The mating pair continue to fly in this position. The male transfers sperm from the tip of his abdomen to a pouch in a more accessible spot. Then the female swings her long, slender abdomen around to the sperm pouch, until the pair's bodies form a wheel. Depending on the species involved, the two remain flying in this position from a few seconds to more than an hour.

Dragonflies have been zipping over rocks and around plant stems for a very long time -- about 300 million years in fact. The fossil record reveals that giant relatives of the modern dragonfly had wingspans of nearly 3 feet, making them the largest insects ever. They were probably the first insects to fly. The dragonflies as we know them today had already evolved by the time of the dinosaurs, 180 million years ago.

One species, the Hine's emerald dragonfly (Somatochlora hineana) has the dubious distinction of being the first dragonfly to be listed as endangered by the federal government. It is also endangered in Wisconsin.

This large, elegant, metallic green species is known from less than fifteen places in Wisconsin and Illinois. It was previously known to occur in Indiana and Ohio, but now appears to have been extirpated (exterminated) from those states. The Hine's emerald dragonfly's habitat is restricted to only a few wetlands.