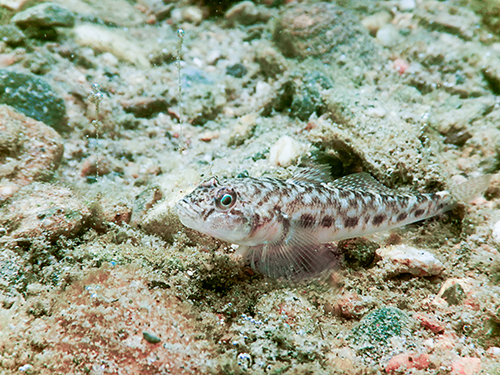 Homeland: The Black and Caspian Seas, the same home as the zebra mussel.

Arrival Date: First discovered in Great Lakes at Lake St. Clair in 1990. Scientists think they traveled here in ballast water from ocean going vessels. They were found in 1994 on the east shore of Lake Michigan and have now invaded all of the Great Lakes, the Mississippi, and most likely all tributaries that lead to Lake Michigan up to the first dam.

How to identify: This invader is a bottom dwelling fish with a large head, resembling a tadpole. It can can grow to be 10 inches long but is usually five or six- inches-long.

Look for the unique bottom fins on the belly that are connected. They form a suction disk that helps this fish hold onto rocks in fast moving water. The goby also has dorsal fins without spines. Young are a solid slate gray in color and larger fish have black and brown patches with a greenish dorsal fin.

Round gobies are successful invaders because they:

The zebra mussel is an important part of the goby’s diet and one goby can eat as many as 78 zebra mussels per day, which may reduce the numbers of this other invader but will not eliminate them. Predators of the goby include sport fish like the smallmouth and rock bass, walleye, yellow perch, and brown trout.

These invaders can be a nuisance near shorelines since they often steal worms or other invertebrates from your hook. They can also get on your line when you really want to catch perch, but don't let them go. They should be thrown in the trash!

Disguise: Be careful, round gobies look like the sculpin, a native bottom dwelling fish. They both have similar markings, are black during spawning, and have a black spot on the dorsal fins. Look for the separate bottom fins on the underbelly to know it is a sculpin and not a goby.

Getting rid of these invaders is nearly impossible once they multiply. What can you do?

1. Learn to identify the round goby and the differences between the goby and the sculpin.
2. Do not use gobies for bait.
3. Empty bait buckets in the trash before going to another location.
4. You can keep and freeze one round goby in order to report it to your local DNR or Sea Grant office.