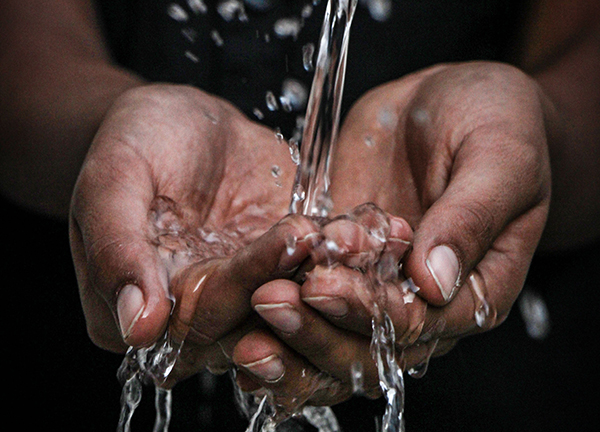 Did you ever wonder where all of the water you use comes from? In Wisconsin, most of us get our water from under the ground. Groundwater doesn't flow like an underground river. Instead, groundwater is stored in and moves slowly through layers of soil, sand and rocks called aquifers. It can be kind of hard to picture how this works, so to help you out, we’re going to make an aquifer. In this case, it will be an edible aquifer. This will show you how groundwater is stored and how what we do above ground can affect the water underground. 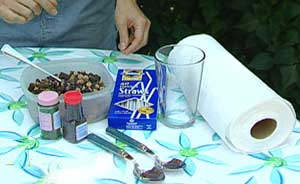 The first step to making our edible aquifer is to fill a small, clear cup about one-third of the way with your chocolate pieces. This represents all of the sand, gravel, and rocks in the aquifer.

The next layer of our aquifer is called the confining layer, which is usually clay or dense rock. The water is confined below this layer. Today our confining layer is going to consist of ice cream. Spread a layer of ice cream over the chips and soda. Now add another layer of “gravel and sand,” chocolate chips. 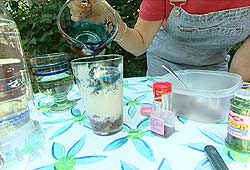 Now add some food coloring to a small amount of soda. The coloring represents pollution.

The next layer is our porous, top layer of soil. Decorating sprinkles and some colored sugar can be used to represent this layer.

Now add some food coloring to a small amount of soda. The coloring represents pollution. Can you think of some pollutants that can affect groundwater? Watch what happens when we pour it on the land.

By sucking on the straw, you can pump the well and watch as the water table goes down. 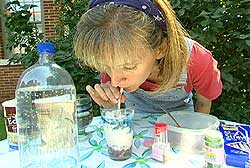 Now, using your straw, drill a well (push the straw down toward the bottom of the cup) into the center of your aquifer. Slowly begin to pump the well by sucking on the straw. Watch as the water table goes down. Also, watch and see how the contaminants can get sucked into the well area and end up in the groundwater by eventually leaking through the confining layer.

Pretend it's raining and recharge the aquifer by adding more soda. A real aquifer takes a lot longer to recharge, this is just an example to speed up the process and give you a little more soda to drink! That's it, now it's time to eat up your aquifer.